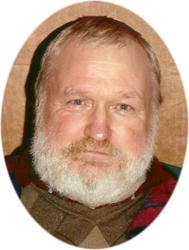 A Celebration of Life for Virgil A. Jacobs, age 60, of Burtrum, will be at 11:00 AM Monday, October 8, 2012 at St. Mary’s Catholic Church in Upsala.  Fr. Ron Dockendorf will officiate and private burial will take place at a later date.  Virgil passed away peacefully at his home in God’s country surrounded by his loving family.  There will be a visitation from 4-9:00 PM Sunday, October 7, 2012 at St. Mary’s Catholic Church in Upsala, and again after 10:00 AM on Monday until the time of service.Virgil was born October 8, 1951 in Melrose to Edward and Veronica (Stueve) Jacobs.  He graduated from Upsala High School in 1969.  He married Lois Sobania on June 28, 1980 in Opole.  During their first few years of marriage, they lived in Sartell before moving to Upsala.  Virgil worked in construction for most of his life while farming.  In his later years, he was a welder, most recently at Polar Tank in Opole.  Virgil enjoyed fishing in his free time, smoking his pipe, and riding his motorcycle.  In the summer he enjoyed planting his garden and tending his houseplants.  He often joked about his “green thumb” as he smiled.  He enjoyed spending time with his children, grandchildren, brothers and sisters, family and friends.  He was always proud of his grandchildren.  Virgil had a nine-year courageous battle with cancer.  Throughout those trying years, he maintained a positive attitude that the doctors said gave him strength and they were amazed how far it took him. Virgil is survived by his children Keith Jacobs (Dawn Schmits), Paynesville; Kimmy (Dave) Dahl, Anoka; Stephanie Jacobs (Curtis Fischer), Paynesville; Nancy (David) Stalboerger, Spring Hill; Cindy Jacobs (Chas Stuns), Sartell; Ronald Jacobs (Teriana Bense), Upsala; grandchildren Dylan Gertkin, Andrue, Mathew, and Henry Stalboerger, Arrianna and Brianna Merritt, David Dahl, Hunter Stueck, Aiden Brannon, Holly Jacobs; brothers Vernon (Mary) Jacobs, Melrose; Jerry (Mary) Jacobs, Elmdale; sisters Marion Kurtz, Albany; Carol Ann Ritter, Long Prairie; and many loving nieces, nephews, and friends. Virgil was preceded in death by his parents, Edward and Veronica Jacobs, sisters Lillian VanHeel/Velcamp, Delores Roerick, Darlene Ahrens; infant brother Laverne Jacobs; and nephew Leo Jacobs.Many thanks to all family, friends, and fantastic neighbors that would do anything for Virgil at any time of the day no matter how little or big the task; this meant so much to him.  Also, thanks to the St. Cloud Hospital Hospice, University of Minnesota Masonic Cancer Center and Dr. A. Dudek, the Albany Area Hospital, and Dr, Nate Brever and the nursing staff.  Virgil is now done “ticking people off.”  We are grateful for the little time we had him with us and have many stories to remember him by.In lieu of flowers, memorials are preferred.

Stephanie, Nancy, Cindy and Ronnie- My thoughts and prayers go out to the entire family. I will always remember his smile. May God help you through this difficult time. Deepest sympathy- Amber (Sobania) Yourczek

My deepest sympathy goes out to the family. Virgil was a great friend who will always have a special place in my heart. I will miss him and our phone calls.
Rest in peace and Happy Birthday in Heaven.
Cindy Waytashek

Thinking of you my dear friend. My heart is soo sad for your loss. Blessings to you and your family through this hard time you are facing. May your dad rest in peace and may he be welcomed in the arms of our Heavenly Father. We are always happy to help, if you need anything let us know!!

Matthew 5:4
Blessed are those who mourn, for they shall be comforted.