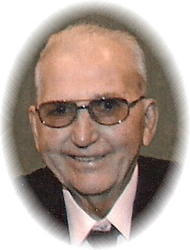 The Mass of Christian Burial, celebrating the life of Werner L. Breth, age 88 of St. Francis will be 1:00 PM, Saturday March 10 at the St. Francis Catholic Church in St. Francis.  Burial will be in the parish cemetery. Werner died peacefully in his sleep on Wednesday, at his apartment in Albany.  There will be a visitation from 4-8 PM Friday and again after 12:00 PM Saturday at the church in St. Francis. St. Francis parish prayers will be at 7:00 PM Friday at the church.  Arrangements are being made by the Miller-Carlin-Brenny Funeral Home, Albany.Werner was born January 15, 1924 in St. Anthony to Stephen Sr. and Catherine (Gerads) Breth.  He grew up in St. Anthony and entered the U.S. Army in 1946, serving as a member of the Military Police.  After his discharge, he returned to the area and married Barbara Berscheid on May 18, 1948.  The couple has lived in the St. Francis area all of their married life, farming together on their farm.  Werner was a member of the St. Francis Catholic Church and the Albany American Legion.Werner is survived by his wife, Barb, Albany; his children; Glen (Irene) Breth, Albany; Thomas (Joan) Breth, St. Joseph; Donald (Susan) Breth, Bowlus; Joan (Gary) Rademacher, Holdingford; Ray (Janice) Breth, Royalton; Carol (Claude) Reimche, Yucaipa, CA; 22 grandchildren and 37 great-grandchildren.  He is also survived by his brothers and sisters, Dorain Layton, Portland, OR; Reinhard (Ione) Breth, Upsala; Irene (Ernest) Pierskalla, Albany; Herbert Breth, Melrose; Martin (Alvina) Breth, Albany and Stephen Jr. (Antoinette) Breth, Albany.Werner is preceded in death by his parents, his son, David Breth, infant sons, Gerald and George Breth, his sister-in-law, Irene Breth and brother-in-law, James Layton.

The Mass of Christian Burial will be at 1:00 PM

The Mass of Christian Burial will be at the St. Francis Catholic Church in St. Francis

So sorry to hear about Werner! Our deepest sympathies to Barbara and the entire Breth family!