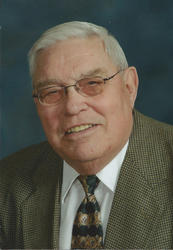 Mass of Christian Burial celebrating the life of Bill “Sarge” Thielen, 82, St. Cloud, will be at 11:30 AM on Friday, October 21, 2016 at St. Peter’s Catholic Church, St. Cloud.  Bill passed away Saturday evening after a brief fight against an aggressive form of leukemia.  There will be a visitation from 9:30-11:30 AM Friday morning at the church.

Bill was born on Sept. 25, 1934 to Hubert and Naomi “Mae” (Johnson) Thielen in St. Cloud.  He grew up the youngest of five children and graduated from Tech High School.  On Oct. 13, 1956, he married Dolores Blommer in Waite Park and their union welcomed five children.  Bill loved sports, especially baseball and football, and spent over 15 years as an umpire for slow-pitch softball in the St. Cloud area.  He was an avid card player and didn’t like to lose.  One of his core values he passed on to his children was honesty and to never tell a lie.  He was blunt and to-the-point and known for calling a spade a spade.  Bill may have been gruff on the outside, but he had a heart of gold and was always willing to help others any way he could.  He was a caring husband and father and the memories he created with his family, such as trips and fishing with his kids, will be cherished.  Bill worked for DeZurik in many capacities until his retirement in 1997.  He remained physically active into his later years, and even joined Sr. Yoga with Dolores.  Bill was a member of St. Peter’s Church, a member of the Resurrection Choir, and volunteered as an usher for many years.

He is greeted in Heaven by his parents Hubert and Mae Thielen, and his siblings Hope Sefkow, Robert Thielen, Peggy Goranson, and Ruth Emslander.

Our deepest sympathies to the family.