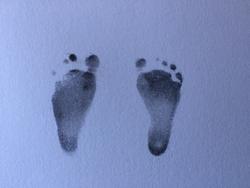 Wyatt Joseph Tuorila was born on Wednesday, May 13, 2015 at 10:59 PM to parents Clinton and Cheryl (Hallermann) Tuorila at the St. Cloud Hospital.  He weighed 12oz. and was 11in. long.  Wyatt’s parents were blessed with a half hour with him before he was called to his heavenly home at 11:18 PM.  In his short time, Wyatt experienced being held by his parents, hugs and kisses, and being told he was loved countless times.

There will be a private gathering of family to love and support each other and to come together in Wyatt’s memory.

A memorial service for family will be held privately.