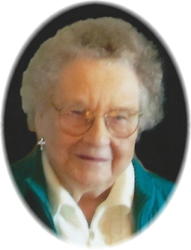 Services celebrating the life of Allegra Hannah Sjurseth, age 92, of Albany, will be at 11:00 AM on Monday, July 27, 2015 at Immanuel Lutheran Church in Farming.  Pastor Frederick Kutter will officiate and burial will take place in the church cemetery.  Allegra passed away peacefully early Wednesday morning after a brief illness.  There will be a visitation from 4:00-8:00 PM on Sunday, July 26, 2015 at the Miller-Carlin Funeral Home in Albany and again after 10:00 AM Monday at the church.  Arrangements are being made with Miller-Carlin Funeral Home, Albany.

Allegra was born at home in Farming Township on October 28, 1922 to Otto and Clara (Jopp) Lemke.  She was raised with three siblings in the Farming area.  On September 12, 1942, she married Arthur Sjurseth at Immanuel Lutheran Church in Farming and their union welcomed three sons.  They lived for 30 years in Hope, ND where Allegra worked as a clerk in a clothing store in addition to being a homemaker.  Allegra’s children remember her canning, baking pies, and sewing their clothes.  After Arthur’s death, she returned to Albany to care for her elderly mother.  Allegra was active in both of her parishes, ND and MN, where she belonged to the Ladies’ Aide and taught Sunday school for years at each church.  She enjoyed visiting with family and friends and socializing at fish frys.  Allegra was a kind, loving, and giving woman.  She was an active member of Immanuel Lutheran Church in Farming.

She was preceded in death by her parents Clara and Otto, her husband of 35 years Arthur in 1987, her brother Erhard Lemke, her sister Adeline Campbell, her brother-in-law Robert Kjelstad, and sister-in-law Pat Bjorklund.

Services celebrating the life of Allegra Hannah Sjurseth, age 92, of Albany, will be at 11:00 AM on Monday, July 27, 2015. Pastor Frederick Kutter will officiate and burial will take place in the church cemetery.

Aunt Lee was a true family treasure and we will miss her dearly. She was a women of great faith and full of love. May she ever rest in the peace of our Lord.

So sorry to hear about your mothers passing.  She was a kind lady and I know she will be truly missed by all of you.  God bless her memory.

So sorry to hear this.  May she rest in peace. Thinking of your entire family.  You are all in our prayers.