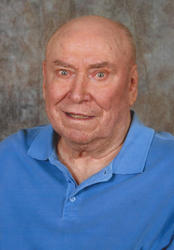 The Mass  of Christian Burial, celebrating the life of Ambrose “Andy” Stanoch, age 99 of Holdingford, will be 11:00 AM, Friday, July 21 at Our Lady of Mount Carmel Catholic Church in Opole.  Burial will be in the Minnesota State Veterans Cemetery in Little Falls.  Andy died peacefully at his home on July 11.  There will be a visitation after 10:00 AM, July 21 at the church in Opole.  Arrangements are being made by the Miller-Carlin Funeral Homes.

Andy was born in Brockway township to Walter and Mary (Rudolph) Stanoch.  He grew up on the family farm and then moved to Minneapolis where he tended bar before entering the U.S. Army in  June of 1941.  He was attached to the 327thAirdrome Squadron serving as a airplane maintenance tech on fighters and bombers in Alaska and Burma.  He married Leona Plaziak on November 24, 1948 in St. Austin’s Catholic Church in Minneapolis, the couple moved to their farm near Holdingford where they farmed together until Leona died on December 24, 1999.   Andy was a member of Our Lady of Mount Carmel Catholic Church where he had been active as an usher.  He was also a past member of the Knights of Columbus.

Andy is preceded in death by his parents, his wife, Leona, and his sisters and brothers, Lucy Skwira, Josephine Dolan, Helen Stanoch, Lorraine Sachs, Valeria Stanoch and Claudie Stanoch.

The Mass of Christian Burial will be 11:00 AM, Friday, July 21 at Our Lady of Mount Carmel Catholic Church in Opole