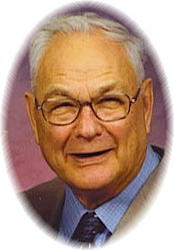 The Mass of Christian burial, celebrating the life of Ambrose A. Wentland, age 84, of Holdingford, will be 11:00 AM Wednesday, April 14, at St. Hedwigs Catholic Church in Holdingford.  Burial will be in the parish cemetery.  Ambrose died Saturday night at St. Gabriel’s Hospital in Little Falls.  There will be a visitation from 4-9:00 PM Tuesday at the Miller-Carlin-Brenny Funeral Home in Holdingford and again after 10:00 AM Wednesday at the church.  The Knights of Columbus will pray a rosary at 6:00 PM followed by the St. Hedwigs parish prayers at 7:00 PM Tuesday evening at the funeral home in Holdingford.Ambrose was born December 15, 1925 in Holdingford to Ignatius and Anna (Bieniek) Wentland.  He served in the U.S. Navy from 1944 – 1945.  Ambrose married Lorraine Fedor on May 28, 1949 in Holdingford. The couple farmed together.  Ambrose was a member of St. Hedwigs Catholic Church, The Knights of Columbus, the Holdingford Legion, the Holdingford VFW and the Holdingford Sportsmans Club.Ambrose is survived by his children; David (Jaelene) Wentland, DePere, WI; Diane (Greg Hughes) Johnston, Cook, MN; Duane (Karen) Wentland, Rice, MN; Daniel (Jeanne) Wentland; Mauston, WI; Donna (Roger) Lutgen; Avon, MN; Denise (Skip) Swanson, Ramsey, MN; and Debra (Brad Plunkett) Wentland, Woodland, WA.  He is also survived by his brothers, Leo Wentland and Louis (Eleanor) Wentland of Holdingford, 16 grandchildren and 8 great-grandchildren.Ambrose is preceded in death by his parents, his wife on August 27, 2007 and nine brothers and sisters.

Dan, so sorry to hear about your Dad, from my family to yours, our deepest condolences.

I am so sorry to hear of the passing of your Dad. He and your Mother were both very kind, caring people. May their memories help you get through this tough time. I will not be able to get down for the services but rest assured, my thoughts are with you all nonetheless.