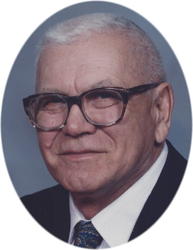 Mass of Christian Burial celebrating the life of Arnold Platz, Sr., age 93, of Albany will be at 11:00 AM on Tuesday, June 2, 2015 at Seven Dolors Catholic Church in Albany.  Father Brad Jennegis, OSB will officiate and entombment will occur in the parish cemetery.  Arnold passed away Friday evening with family at his side.  There will be a visitation after 9:00 AM until the time of service Tuesday morning.  Arrangements are being made with Miller-Carlin Funeral Home, Albany.

Arnold was born at home in Albany on April 24, 1922 to Joseph and Mary (Tomsche) Platz.  He grew up in the Albany area with eight siblings. On April 12, 1947, Arnold married Doris Kalm at the Holy Trinity Church in S. St. Paul and welcomed 11 children into their family.  Arnold spent over 20 years in the Twin Cities area while he worked different jobs at Swift Meat Packing before moving to the Holdingford area.  He was on the Holdingford School Board for 13 years.  Arnold was also a famer and enjoyed gardening, especially sweet corn.  Arnold loved rodeos, was an avid card player, and enjoyed the trips he took to North Dakota with Doris.  He was a member of Seven Dolors Church in Albany.

He is preceded in death by his parents Joseph and Mary, his wife Doris in 1997; his daughter Linda Koerner in 2012, his siblings Margaret Eiynk, Joe (Sally) Platz, Jr., Jeanette Tinglo, and infants Florence and Lawrence, grandchildren Christopher Platz and Billy Koerner, and sons-in-law Roger Smith and Mike Yamry.

Mass of Christian Burial celebrating the life of Arnold Platz, Sr., age 93, of Albany will be at 11:00 AM on Tuesday, June 2, 2015. Father Brad Jennegis, OSB will officiate and entombment will occur in the parish cemetery.

You will be greatly missed grandpa, rest in peace and say hello to grandma for us

To the Platz family and Rosemary and Ralph Barhorst:

We were worry to hear of your Dad’s passing.  It’s always hard no matter how old they are.  We will light a candle in church and know that we will keep your family in our prayers.

Platz family – Jim and I are sorry to hear of your dad’s passing.  Jim remembers hunting at the farm in Hampton and fun in the hay loft.  He told me of a time when he and Arnie Jr. were on the tractor at night. Jim kept flicking the lights on and off.  Down the road comes a car with his dad (Bob) and your dad.  Boy was your dad mad a t him for flicking the lights on and off.  He yelled and told both of you to get back up to the house.  Keep memories close to your heart – those will never go away.  Prayers and hugs to you all.