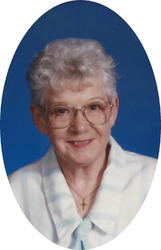 The Mass of Christian Burial, celebrating the life of Bernadine “Benny” Woerner, 100 of Brooklyn Park, formerly of St. Cloud, will be 11:00 AM, Friday September 19th at Holy Spirit Catholic Church in St. Cloud.  Burial will be in Assumption Cemetery. Benny passed away September 12 at Waterford Assisted Living in Brooklyn Park.  There will be a visitation from 4-8:00 PM Thursday at the Miller-Carlin Funeral Home in St. Cloud and again after 10:00 AM Friday at the church.  Holy Spirit parish prayers will be at 7:00 PM Thursday evening at the funeral home.

Benny was born January 12, 1914 in Waverly, Iowa to Adelaide (Pfluger) and Arthur Brooks.  She graduated from Anoka High School in June 1932 and from Humbolt Business College in Minneapolis in 1934.  She also attended the University of Minnesota and St. Cloud State College.  Benny married George F. Woerner on May 29, 1937 at St. Stephens Catholic Church in Anoka.  George and Benny moved to St. Cloud in 1951 and lived there for 55 years. Benny and George owned the Woerner Midwest Furniture Barn in St. Cloud for many years and she worked at the St. Cloud VA Medical Center until her retirement.  Benny was a founding member of Holy Spirit Parish, a Crosier Apostolate and a member of the Daughters of Isabella Stella Maris Circle #558.  She was also active in Scouting where she was a den mother for 5 years.  She was Past President and Treasurer of the American legion Auxiliary Post 76 and a Red Cross Volunteer.

She is preceded in death by her parents, her husband, George on February 7, 1973, her son, Gregory Woerner and her sister, Gertrude Moos.

Visitation will be from 4-8:00 Thursday, September 18with Holy Spirit parish prayers at 7:00 PM. Visitation will also be one hour prior to the servcies Friday at the church.