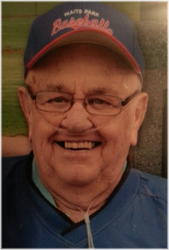 Services will be 11:00 AM, Thursday, January 30 at the First United Methodist Church in Sartell for Darrell G. Rapp, of 75 of St. Cloud.  Darrell died Sunday at his home after a long illness.  There will be a visitation from 4-8:00 PM Wednesday at the Miller-Carlin Funeral Home in St. Cloud and again after 10:30 AM Thursday at the church in Sartell.Darrell was born September 29, 1938 in Aurelia, IA to Ervil and Gladyce (Stutz) Rapp.  He Married Roberta (Bobbie) Gates on June 7, 1959 in Cherokee, IA.  The couple lived in Iowa, Nebraska, Kansas and South Dakota before moving to St. Cloud in 1972.  Darrell worked as an area manager for Mobil Corp until he retired in 1994.  He was very active in Waite Park Babe Ruth Baseball where he coached and managed the fields for many years.  In the summer of 2013, the city of Waite Park named one of the baseballs fields after Darrell.  He was a member of First United Methodist Church.Darrell is survived by his wife, Bobbie, St. Cloud; his daughters, Lora (Kevin) Thomas, Northfield and Lisa (Ken Jonas) Rapp, Waite Park.  He is also survived by his grandchildren, Craig, Cory & Courtney Dahl and Kyle, & Luke Thomas; great-granddaughter Riley Jean Wheeler;  his brothers and sisters, Kenneth (Merna) Rapp, San Antonio, TX; Susan (Dayton) Hunter, Rockford, IL; Joleen (Jerry) Bruce, Aurelia, IA and Terry (Susan) Rapp, Phoenix, AZ

I am so sorry for your loss. May the wonderful memories help ease the pain. Thoughts and Prayers to you all!

Our thoughts and prayers with you always. May he Rest in Peace.

Sorry for your loss. I enjoyed working with Darrell in Cal Ripken baseball. It was all about the kids!

Darrell was a big fixture with St. Cloud Baseball! He had a gruff exterior, but inside was one of the nicest, hardest working individuals I had ever met! RIP!

I had the pleasure to work with Darrell Rapp with Waite Park Cal Ripken Baseball. He help organize and run many state and regional tournament for MN Babe Ruth. Darrells passion for life, youth baseball and Waite Park Baseball was instrumental for the program and community. Darrell loved giving all he could for youth baseball and his family. He will be remembered for his passion for youth, families and people. He was a devoted family man and always talked so highly about them. We will all miss Darrell. Our simpathy to you and your family for your loss.