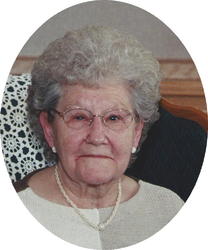 Funeral services celebrating the life of Dolores B. Kleve, age 91 of Albany, will be 3:00 PM, Thursday, April 10 at Seven Dolors Catholic Church in Albany.  Burial will be in the parish cemetery.  Dolores died Sunday at the Mother of Mercy Nursing Home in Albany.  There will be a gathering from 4-8:00 PM Wednesday and again after 2:00 PM Thursday at the Miller-Carlin Funeral Home in Albany.  Seven Dolors parish prayers will be at 4:00 PM Wednesday followed by the Seven Dolors Christian Mothers at 5:00 PM.Dolores was born September 7, 1922 in St. Rose, MN to Henry and Agnes (Stoermann) Hoppe.  She married Walter Kleve on July 23, 1946 in St. Rose.  Dolores was a homemaker, raising her six children and she worked for Fingerhut and then Jennie-O Foods.  She was a member of Seven Dolors Catholic Church and the Seven Dolors Christian Mothers.Dolores is survived by her children, Duane (LouAnn) Kleve, Albany; Joyce (Lornie) Middendorf, St. Rose; Janice (Donald) Braegelmann, Albany; Denise (Jon Hedtke) Stafford, Regal; and Delilah (Ronald) Stellmach, Foley.  She is also survived by 18 grandchildren and 22 great-grandchildren and daughter-in-law, Julie Kleve.Dolores is preceded in death by her parents, her husband, Walter on June 4, 1986, her son, Delroy Kleve;  her brothers, Bernard Hoppe, Lawrence “Swede” Hoppe, Wilfred Hoppe, Clarence Hoppe, Ambrose Hoppe and Alphonse Hoppe and her sisters, Oswalda Muellner and Angela Muellner.The family would like to thank the Albany Hospital, the 3rd Floor nurses at Mother of Mercy and Dr. Nate Brever for their compassionate care of Dolores.

Funeral services celebrating the life of Dolores B. Kleve, age 91 of Albany, will be 3:00 PM, Thursday, April 10, 2014. Burial will be in the parish cemetery.

Lilah, heard the news of your Mother. I am very sorry to hear of this news. I know how hard this can be. You will be in my thoughts and prayers. Hugs, Dawn