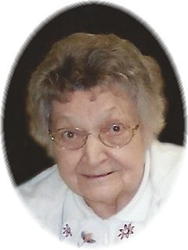 The Mass of Christian Burial, celebrating the life of Dolores M. Fuchs, age 91 of Albany, will be 11:00 AM, Thursday, June 12, 2014 at Seven Dolors Catholic Church in Albany.  Fr. Cletus Connors, OSB will officiate and burial will be in the parish cemetery.  Dolores died Sunday at the Albany Area Hospital.  There will be a visitation from 4-8:00 PM Wednesday and again after 10:00 AM Thursday at the Seven Dolors Parish Center.  Seven Dolors parish prayers will be at 4:00 PM Wednesday.  Arrangements are being made by the Miller-Carlin Funeral Home.Dolores was born March 21, 1923 in Avon to Henry and Rose (Bergmann) Wiechmann.  She married Martin Fuchs on May 26, 1942 in Avon.  The couple farmed in the Albany area until Martin died in 1978.  Dolores continued to farm with her son until moving to Albany in 1999.  She was a member of Seven Dolors Catholic Church and the Seven Dolors Christian Mothers.Dolores is survived by her children, Irma (John) Achmann, St. Wendel; Alice Cigelske, Albany; Clara (Michael) Deters, Albany; Irene (Ken) Goebel, Freeport; Carol Ann Schmidt, Avon and  Vernon (Andrea Ramacher) Fuchs, Freeport.  She is also survived by her sister, Marcella Achmann, Avon; brother, Meinrad (Dolores) Wiechmann, Litchfield, 18 grandchildren, 24 great-grandchildren and 3 great-great grandchildren.Dolores is preceded in death by her parents, her husband, Martin in 1978, her daughter Rosemary in 1956, her granddaughter Rosemary Piccolo, her sister, Leona Wiechmann and her brother, Elmer Wiechmann, sons-in-law, Allen “Butch” Cigelske and Ervin Schmidt.