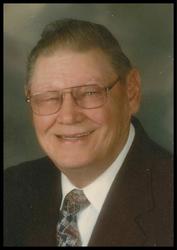 Services celebrating the life of Earl Frank Metzger, age 81, of Upsala, will be 1:00 PM Thursday, March 17, at Mount Olive Lutheran Church in Upsala.  Burial will be in the Minnesota State Veterans Cemetery, Little Falls.  There will be a visitation from 4-8:00 PM Wednesday at the Miller-Carlin Funeral Home in Upsala and again after 12:00, noon Thursday at the church.Earl was born in Stearns County, MN on August 13th, 1929 to Al & Susan Metzger, their first child.   He spent his childhood in Albany, MN with his 6 younger brothers on the family farm.   Earl graduated from Albany High School in 1948 and worked on the family farm and in the area for REA as a Lineman and a Concrete/Cement worker.  He was soon drafted into the United States Army (1950-1952), where he served his country in the Korean War.  After the service, he returned to Albany, MN.  Then, at a dance, Earl met the girl of this dreams, “His” Norma.  They were married at St. John’s Lutheran Church, Krain Township, MN on November 7th, 1953.  They began their life together in the Twin Cites while Earl attended Dunwoody Institute.   After college, they moved to Upsala, MN where Earl went into auto business with the operation of a Skelly gas station in Upsala, MN.  They began their family and then decided to operate a farm in Upsala, have a few more children and finish raising their family.  And they did.  They raised 5 children, and Earl retired after a lifetime of farming and 35 years working at the Veteran’s Hospital in St. Cloud, MN.  Earl was active in his church, served as a volunteer fireman, a Board member of the Lutheran Home of Little Falls for almost 30 years, was an active member of the Legion Post of Upsala and Earl was happily married to his bride for 57 years!  Earl truly enjoyed a good pipe, fishing, spearing, hunting, gambling, singing (he could sing beautifully), dancing, and liked to be in charge.   He battled lung cancer and a stroke and won, and then lost to Alzheimer’s a broken hip and pneumonia .  Earl was a strong, passionate, responsible, honorable man who came across rough at times, but had a heart of gold.  He will be greatly missed.Earl is survived by his wife, Norma, brothers: Gerald (Ardith), Everitt (Barb), Linus, Andy (Bev), (Francis), children:  Mike (Candace), Milissa (Rick), Jeff, Alan (Rhonda), Ken (Denise) and 9 grandchildren.He is preceded in death by his parents and 2 brothers, Jim and Dennis.

There will be a visitation from 4-8 PM Wednesday, March 16 2011 at the Miller Carlin Funeral Home in Upsala