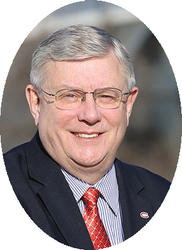 Friends, family and community are invited to a Campus and Community Gathering from 3-5 p.m. June 17 at the Herb Brooks National Hockey Center at St. Cloud State. Funeral service will be at 11 a.m. June 18 at St. John’s Episcopal Church in St. Cloud.

Born October 4, 1946 in Providence, Rhode Island, to Earl H. Potter Jr., and Dorothy (Nelson) Potter, he spent his childhood in North Kingston, Rhode Island. Serving in the U.S. Coast Guard from 1969 to 1993, he retired at the rank of Captain.

He served on multiple Minnesota community boards, national boards and international associations. Throughout his life, he was dedicated to service, social consciousness and fostering community.

He was always generous, quick to give credit to those around him, and his many stories were often punctuated with humor. With deep connections to the St. Cloud community and throughout the world, his leadership, friendship, and caring nature will be deeply missed.

Earl is survived by his wife Christine; his daughter Margaret of Minneapolis; son Christopher, his wife Elizabeth (Nowlis) and their 3 daughters of Boston; son Earl, his wife Lily (Lee) and their son of Miami; and daughter Jamie of St Cloud. He is also survived by a brother Dean Potter and his wife Shelley (Nadell); and sister Deanne DeFusco and husband Guido. He is preceded in death by his parents Earl H Potter Jr. and Dorothy (Nelson) Potter, and his son K. Brandon Potter.

Friends, family and community are invited to a Campus and Community Gathering from 3-5 p.m. June 17 at the Herb Brooks National Hockey Center at St. Cloud State.

In lieu of flowers, the family asks that gifts be made in honor of Earl H. Potter III to the St. Cloud State University Foundation, Lewis House, 720 Fourth Avenue South, St. Cloud, MN56301 or www.stcloudstate.edu/foundation.

our thoughts and prayers are with you…

i did not know Earl personally, but my son went to Saint Cloud State and told me what an inspirational man he was.

Blessings to the Potter family.  I’m writing on behalf of my mother, Pauline Hoover, 90 years old, who was very sad to learn of Dr. Potter’s passing.  Dr. Potter gave Polly one of the greatest gifts of her life when he granted her a “Certificate of Lifelong Learning” from SCSU when she was 85 years old.  Polly had to decline a scholarship to St. Ben’s and leave school after the 8th grade to work on her family’s dairy farm in St. Joe.  It was a great disappointment to her as she had always excelled in school.  When my father, Joseph Hoover, started attending SCSU after retirement at age 65, Polly began auditing courses, just for the love of learning.  She audited courses at SCSU for 22 years and never expected this would be acknowledged in any way.  So it was a really wonderful thing when she received a letter from Dr. Potter informing her that she would be receiving this award.  It meant the world to her.  She was so grateful for Dr. Potter’s enthusiasm and support for making it happen.  She sends her deepest condolences, thoughts, and prayers to your family at this time and wanted you to know how special Dr. Potter is to her.