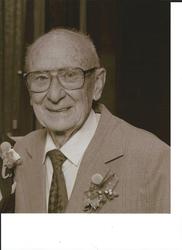 Mass of Christian Burial celebrating the life of Edward Lowe, will be held at All Saints, St Hedwig’s Catholic Church in Holdingford on Friday, October 3, 2014 at 11:00 AM.  Father David Grundman will officiate. Committal with military honors will be held at 2:00 PM, Friday at the Minnesota State Veterans Cemetery in Little Falls.  Ed passed away Sunday morning surrounded by family.  There will be a visitation from 4:00-8:00 PM on Thursday, October 2, 2014 at the Miller-Carlin Funeral Home in Holdingford and from 10:00 -11:00 AM, Friday at the church.  Parish prayers will be at 5:00 PM Thursday evening at the funeral home.  Arrangements are being made with Miller-Carlin Funeral Home, Holdingford.

Edward Lowe Jr. was born to Edward and Marie Lowe, the oldest of 3 sons.  He was raised in  St. Paul and Willernie, MN. He served in the U.S. Navy 1944-46 as a radar instructor.  He married his high school sweetheart, Dorothy Gurney, on June 28, 1947. He attended the University of MN and Macalester College on the GI Bill, earning a bachelor’s degree in science and education.   In 1950 he accepted a teaching position at Holdingford High School.  After earning a master’s degree in school administration, he became the principal, retiring in 1980.  It was under his leadership that the current high school was built in Holdingford in 1972.  His hobbies included gardening, fishing, camping and travel.  He was a Helping Hands volunteer for many years.  He loved building and flying model airplanes, and spent many hours rebuilding them after numerous crashes.  For 20 years Ed and Dorothy traveled to Mexico where they supported an orphanage and brought supplies and clothing to girls’ schools in Guadalajara.

He was preceded in death by his parents, his brothers Thomas and Robert, and his son, Thomas.

Special thanks to Albany and St. Croix Hospices, Helping Hands and the staff at Ridgeview Assisted Living. In lieu of flowers, the family requests memorials be given to Helping Hands of Holdingford or Initiative Foundation/Holdingford Scholarship Endowment (HSE).

Visitation will be from 4-8:00 PM Thursday, October 2 at the Miller-Carlin Funeral Home in Holdingford and from 10-11:00 AM Friday at St. Hedwigs Catholic Church in Holdingford.

In lieu of flowers, the family requests memorial be given to Helping Hands of Holdingford or Initiative Foundation/Holdingford Scholarship Endowment (HSE)

The Mass of Christian Burial, celebrating the life of Edward Lowe will be held at All Saints, St. Hedwig’s Catholic Church in Holdingford on Friday, October 3, 2014 at 11:00 AM

Ed Lowe was a great man and Principal. Working with Ed was always a new journey. I remember the day he asked me if I wanted to see a Polish trailer. He had me follow him all around the school being I was the Polish Trailer and didn’t know it while he laughed all the way.  God fobid if a teacher left his window open. We had to go beg for the rerturn of the window crank the next day.
Rest in Peace Mr Lowe you are a great man.

“Sometimes you will never know the value of a moment until it becomes a memory.” Thanks Ed for all the memories you have given each of us, especially your family. You will never be forgotten.

Working as a secretary  for Mr. Lowe for 11 years was very educational—-I learned all I needed to know about high school office work from him.   Ed was very good at getting things accomplished–sometimes all the way to the last minute but we made it.   He had a “hard shell” but a “heart of gold”.   Thanks Mr. Lowe for everything you did for me and for my family.   You will be remembered.  Esther Ertl