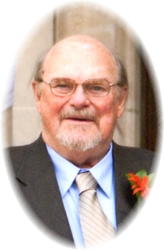 Memorial services celebrating the life of Eric Andrew Errickson, age 76 of St. Cloud will be from 3-4 PM Wednesday, December 19th 2012 at the Miller Carlin Funeral Home.  There will be a gathering time before the service from 2:30-3PM and a celebration of life visitation held from 4-7PM following the service.  Chaplain Steve Kampa from Quiet Oaks Hospice will officiate.  Eric passed peacefully in his sleep Wednesday evening at Quiet Oaks Hospice.  Arrangements are being made with the Miller-Carlin Funeral Home in St. Cloud.Eric was born November 12th, 1936 to Arthur and Dorothy (Mayden) Errickson in Independence, Kansas.  He grew up in Kansas but later moved to Minnesota in 1963.  He received his undergraduate degree at Baker University in Baldwin, Kansas, his Masters Degree in Psychology from Pittsburg State University in Kansas, and eventually attained his PhD from the University of North Carolina Chapel Hill In Therapeutic Recreation.  Eric worked at the Hastings State Hospital as the Director of Rehabilitation, and then worked as the Program Director for the Faribault Hospital.  Later he worked as a Research Associate in the Department of Psychiatry at the University of Minnesota.  After his time with the U of M he then took a job as the Director of the Behavior Analysis Program at the Cambridge State Hospital before serving his time in private practice and eventually retiring to Florida in 1997.Eric was an avid sports fan with a great affinity for golf.  He participated in many golf tournaments where he even played internationally.  He also had a knack for playing cards where he was well known for his blackjack skill and most recently duplicate bridge.  Eric may be best known for his lifelong musical gifts.  He was a talented blues and folk singer/songwriter who performed regularly and recorded multiple albums.Eric is survived by his loving wife Vivian Errickson, Ocala, FL; his children Kurt (Cathlyn Garrett), St. Paul; Heidi (Jon) Errickson-Grahek, Centerville; Art (Kate) Errickson, St. Paul; and his grandchildren  Claudia Errickson, Iris Errickson, William Grahek, and Devin Grahek; and his sister Sonja (Jerry) Franklin, Kansas City, KS.He is preceded in death by his parents Dorothy and Arthur Errickson.

Memorial services celebrating the life of Eric Errickson will be from 3-4 PM, Wednesday, December 19th at the Miller-Carlin Funeral Chapel in St. Cloud. There will be a time of gathering from 2:30-3PM prior to the service and a time for sharing from 4-7PM following the service.

Eric’s music was always a breath of fresh air. He was very talented and a genuinely nice person. We will miss his wit and intelligent presence.

Eric was such a great big brother to my dear friend, Sonja. I got to pet sit with sweet cat Mullligan. What a loss for the entire family – a life well lived. Bye, Eric.

Eric, our friend and accompanist, will always be remembered for his wit and sound musical advise. His songs were a breath of fresh air. He will be missed by all of us.

I am writing this for both Dennis and myself. Eric mentored the both of us at the bridge table here in Minnesota and in Council Bluffs, Iowa. For some reason he liked to help those who were less talented than he was (and both Dennis and I fit that category well). He was very entertaining as well as intelligent, and it was always apparent that he loved whatever he did. We both are grateful to have had Eric in our lives. He will be and already is missed by many.

I don’t know how I will ever be able to payforward all the things Erick taught me. I enjoyed him as a friend, a teacher, a blackjack coach and most of all someone who helped me understand life.

Condolencences and best wishes to Errickson family from family of Bob Frahm. Eric was a wonderful & thoughtful friend in so many ways, and will be terribly missed by all he has touched in his remarkable life!

Eric was a cousin and a dear friend as well. I was fortunate to get to know him even better in these last years as he attended my father, Norman White’s, birthday parties and by email. Will always treasure those times and the CD’s that he sent every Christmas for us to enjoy. When I think of him I remember his cheery disposition, singing & compassion during this past year after my father’s death. We will miss him!

Our sympathies to the Errikson family members. Eric touched our lives at the Ocala Duplicate Bridge Club and other bridge events in a lively, congenial, and friendly manner. We loved his humor and music. Thank you Eric for being a part of our lives.

Condolences To you Vivian and the family. I enjoyed visiting with Eric in the Becker pool so often. It’s too bad I didn’t seem to have time to get to know him better.

Eric Errickson was great friend. He gave our family much; literally. He paid for one of our son’s karate lessons; never tired in showing up with nothing but compassion and encouragement for each of us; often. I got to know Eric late in his life, about 15 yrs ago. But it was then that I met a guy who at that time chose to be a folk/blues composer & musician. He chose it and worked hard at it, and even started making CD’s! I didn’t know him in his professional life; only in his passion-for-blues&folk-life. But I’m sure that was his whole life: passion: for family, work, and friends. I’ve been listening to his music today, and it always reminds me to not take myself or anyone else too seriously, but instead, do what he did: give them your time, and your love. Can’t thank you enough for your friendship, Eric. It’ll be good to jam with you at the big one.-Eb G.Jr.

I will sorely miss Eric, he was the first to sing one of my poems to Silent Night music. “Does Anybody Out There Hear Me” and he made it sound really good, at the Woodview Coffee House and was always a friend who encouraged me to read my poetry.

I had the absolute pleasure of recording Eric’s final CD. He allowed me to accompany him on his selections, and I must say, it was incredibly rewarding. I miss him, but I am glad that I was able to help him capture many memories that people will cherish for many years to come. Our few songs we played live together at the Local Blend in St. Joe will continue to be one of the highlights of my musical career.

I will miss you at the Woodview Coffee House, you put one of my poems to music and it was so exciting. You were a good friend!

I send my condolences to Vivian and all of Eric’s family. Eric was a great friend from the moment we met in the mid-1970’s at the University of Minnesota Hospital. He spurred my interest in wine and through the years we shared an interest in music, sports, books, Mexican food, and hot and sour soup. Recently he twisted my arm to start playing bridge again after 50 years absence. Eric influenced me both professionally and personally. I will truly miss his friendship, his humor, and hearing him play and sing the blues live. Eric was a remarkable man who will be missed by me and many, many others. I am so thankful that Eric was an important part of my life for many years.

Eric was a great friend and colleague. I remember many times sitting, playing music and drinking wine. We would discuss the current situation of the day and find a practical solution. He was creative yet practical. He was never far from his Kansas roots.

More than anything Eric was a giving mentor sharing his love for his passions and mine. My condolences to Vivian and his children and grandchildren.

We are saddened to learn of Eric’s passing. He was a good friend, musical colleague, eclectic gastronome and wine connoisseur. He shared his talents with the hungry and those incarcerated. We will miss is music and the example his life gave to all of us.