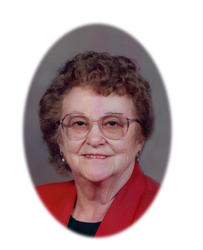 Mass of Christian burial celebrating the life of Frances Joan Theisen, age 90 of Upsala will be 2:00 PM Thursday, November 10, 2011 at St. Mary’s Catholic Church in Upsala.  Father Michael Kellogg will officiate, burial will take place in the St. Francis parish cemetery following the service.  Frances died peacefully surrounded by her family Sunday evening at Mother of Mercy Nursing Home in Albany.  There will be a visitation from 4-9:00 PM, Wednesday, November 9th at St. Mary’s Catholic Church in Upsala, and again from 1:00 PM until the time of the service on Thursday at the church.  St. Mary’s Christian Mothers will pray the rosary at 6:00 PM and the St. Mary’s parish prayers will take place at 7:00  PM Wednesday evening at the church.  Arrangements are being made with the Miller-Carlin Funeral Home of Upsala.Frances was born March 11, 1921 to John and Anna (Wuertz) Schramel in Lake Henry MN.  She lived in Lake Henry until marrying Marcellus Theisen on September 23, 1941 in Lake Henry.  The couple lived in Cold Spring, Lake Henry, and St. Francis before moving to Upsala in 1982 where she lived nearly the rest of her life.  Frances was a loving mother and home-maker raising eight children and helping her husband on the farm.  Frances also had a passion for gardening, flowers, baking, cooking, and spoiling her grandchildren.  She was on the advisory board for the Albany hospital, the St. Francis and St. Mary’s Christian Mothers, and was a member of St. Mary’s Catholic Church of Upsala where she served as a sacristan for many years.Frances is survived by her husband Marcellus Theisen, Albany; her children Rich (Jeanie) Theisen, Maple Grove; John (Trish) Theisen, Sauk Rapids; Jerry (Joan) Theisen, Bowlus; Bob (Judy) Theisen, Freeport; Leo (Janet) Theisen, Walnut Grove; Linda Theisen, Coon Rapids; Ken (Nancy) Theisen, Plymouth; and her 16 grandchildren and 13 great-grandchildren.She is preceded in death by her parents John and Anna Schramel, her son Jim who was killed in combat in Vietnam, her infant children Mary and Joseph, and her siblings Sr. Lumena Schramel O.S.B., Alvina Ethen, Ida Schoenborn, Edmund Schramel, Doris Jennissen, Lorraine Ruff, Anna Moser, John Schramel, Mike Schramel, Regina Winter, and infant siblings Gennivie and Crylla Schramel.

There will be a visitation from 4-9:00 PM, Wednesday, November 9th at St. Marys Catholic Church in Upsala, and again from 1:00 PM until the time of the service on Thursday at the church. St. Marys Christian Mothers will pray the rosary at 6:00 PM and the St. Marys parish prayers will take place at 7:00 PM Wednesday evening at the church.

I am a colleague of Rick Theisen. I wish to express my condolences to the Rick and his family on their loss. May she rest in peace. Jim

Rick and family you are in my thoughts and prayers as you move through the loss of your mother. Having just gone through this with my mother last week, I understand your situation and feel your loss. Let the grace of god enfold you.

To the Theisen Family,
Our thoughts and prayers are with all of you at this time of loss. Leo and Janet, Brian and Aaron we love you and are thinking of you.

Mr. and Mrs. Theisen were my extra set of grandparents when i was growing up, you couldn’t have asked for better neighbors………I still think of them that way……..my thoughts and prayers go out to the Theisen family Tonya

“You have our deepest sympathy.”

I fondly remember spending my 14th year summer at the Theisen farm, helping Frances who was pregnant with Linda at the time. Frances was so good to me, taught me a lot and made me feel like I was important to her. She’s a very special woman and a favorite aunt and will be sorely missed. My sympathy to all of you.
Dorothy