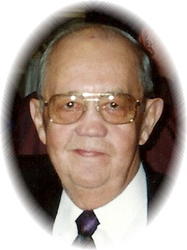 The Mass of Christian Burial, celebrating the life of Frank A. Pelzer, age 86 of Albany, will be 1:00 PM, Wednesday, February 29, at the Seven Dolors Catholic Church in Albany. Burial will be in the parish cemetery. Frank died Friday at the Mother of Mercy Nursing Home in Albany surrounded by his family. There will be a gathering in the Seven Dolors Parish Center from 4-9:00 PM Tuesday and again after 11:30 AM on Wednesday. Seven Dolors Parish Prayers will be at 6:00 PM and the Albany Fire Department will pray at 7:00 PM Tuesday evening at the parish center. Arrangements are being made by the Miller-Carlin-Brenny Funeral Home in Albany.Frank was born June 22, 1925 in Marty (Pearl Lake) to Rudy and Francis (Holthaus) Pelzer. He was a member of the St. Augusta Bachelors Club until he met the love of his life. He married Phyllis Mary Storkamp on August 17, 1955 in the Holy Spirit Catholic Church in St. Cloud. Frank farmed his entire life until he retired in 1989. He and Phyllis then moved to the City of Albany. In 1996 they built their final home in Avon. He was a past board member of the Northern Feeder Pig Association and the “Christian Brothers Club.” Frank and Phyllis loved to travel and did their share of it. Frank was also a member of Seven Dolors Catholic Church.Frank is survived by his children; Kathy Gerads, Holdingford; Mary (Tim) Sauerer, Albany; Debbie VanHeel (Troy), Little Falls; Randy Pelzer, Albany; Jeff “Ozzie”(Pam) Pelzer, Cold Spring; Jack (Gail) Pelzer, St. Joseph; Loren (Deb) Pelzer, Albany; Judy Schepers, St. Cloud; Patty (Jesse) Brinker, St. Anthony; Steve (Kim) Pelzer, Albany; Therese Dufner (Troy), St. Cloud and Kurt (Joanne) Pelzer, Albany. He is also survived by his brothers and sisters, Luella Klaverkamp, St. Augusta; Adeline (Harvey) Laudenbach, St. Cloud; Ed “Boyce” (Terry) Pelzer, St. Cloud; Bernice (Andy) Witchen, Monticello; Beatie (Rich) Neu, Sauk Rapids; Alice (Donny) Ross, Monticello; John (Laverne) Pelzer, South Haven; Marlene (Gary) Laudenbach, St. Augusta; 39 grandchildren, 18 great-grandchildren.Frank is preceded in death by his parents, his wife Phyllis on October 20, 2005, his grandsons, Jeremy Fiecke and Aaron Gerads. He is also preceded in death by his brother, Gene Pelzer and sister, Ruthie Toenjes.

We want to extend out sincere sympathies to your whole family. I (Jan) was a Gohman and Ruth was married to my Uncle Ray. We also lived just down the road from the Farm near Pleasant Lake. I also worked at the Restaurant in Avon and got to see Frank there once in a while. He always had something fun to say.
We had every intention of making the wake but have a very sick granddaughter that we are tending too. Our thoughts and prayers are with you.

Kathy and Family,
So sorry to hear of the loss of your dad. Your family will be in our prayers and thougths.
Joanie