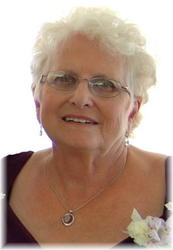 A memorial gathering celebrating the life of Gloria Jean Eng, age 70, of Swanville will be from 4-7 PM Tuesday, January 10, 2012 at the Miller-Carlin Funeral Home in Holdingford.  Gloria died Wednesday at the St. Cloud Hospital surrounded by her family.  Arrangements are being made with the Miller-Carlin Funeral Home serving Swanville.Gloria was born June 25, 1941 in Fargo, N.D. to Harold and Lucille (Jendro) Eng.  She grew up in North Dakota where she lived until marrying George Gustin on November 8, 1958 when they moved to the St. Cloud area.  They later divorced.  She attained a degree from St. Benedict’s College in Social Work.  Gloria not only was a loving mother and home-maker raising her 6 children, she also worked as a full time foster mother for over ten years and as a social worker.  Her greatest interests included sewing, quilting, and spending time with her grandchildren.She is survived by her children Kathy (Jim) DeZeller, Avon; Dennis (Lori) Gustin, St. Cloud; Micheal (Kim) Gustin, Avon; Jodi (David) Wohletz, Holdingford; Rebecca Gustin, St. Cloud; Kimberly (Noy Sayadeth) Gustin, Brooklyn Park; her siblings Audrey Christoff, Tacoma, WA; Patricia Roble, Fargo, ND; Candace (Richard) Karrow, Henderson NV; her 28 grandchildren and 5 great-grandchildren.She is preceded in death by her mother and her father Lucille Hodges and Harold Eng.

A memorial gathering celebrating the life of Gloria Jean Eng, age 70, of Swanville will be from 4-7 PM Tuesday, January 10, 2012 at the Miller-Carlin Funeral Home in Holdingford.

Kathy! What a shock. I am so very sorry for your loss. Know that you are in my thoughts, your family too.

We pray that Aunt Gloria’s soul rests in peace. Our thoughts and prayers go out to the family at this time.

I am so sorry for your loss. Gloria was an amazing woman, mother, grandmother. I knew her through her daughter Jodi , she was so caring and always put others first. I will never forget her or her fun loving spirit. God Bless your family in this difficult time. Rest in Peace Gloria.

To my Gustin cousins – I am so sad to hear of Aunt Gloria’s passing. We are keeping all of you in our thoughts and prayers – many blessings to you and may Aunt Gloria rest in peace. Love her so much…Debbie