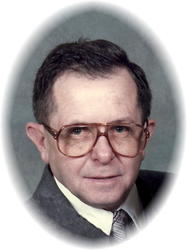 Services for Herbert Bares, age 77 of St. Cloud will be 11:00 AM Saturday, June 25 at the Miller-Carlin Funeral Home Chapel in St. Cloud.  Visitation will be 1 hour prior to the service on Saturday at the funeral home.  Burial will be in Assumption cemetery.  Herbert died Tuesday at the St. Benedict Senior Community.  Arrangements are being made by the Miller-Carlin Funeral Home in St. Cloud.Herbert was born March 28, 1934 to Hubert and Frances (Stumpf) Bares.    He married Helen Ann Richter on November 23, 1957 and the couple raised one son in the St. Cloud Area.  Herbert worked at Jim’s Bicycle Shop in St. Cloud and then in 1972, he opened Security Locksmith in St. Cloud.  He owned and operated Security Locksmith until 2008, when his son took over the business.Herbert is survived by his son  and daughter-in-law, Steven and Heidi Bares of St. Cloud.  His twin grandsons, Andrew and Zachary Bares;  his sisters, LuVerne Niezgocki, St. Cloud and Lillian (Eugene) Jaeger, St. Cloud.Herbert is preceded in death by his parents and his wife, Helen on March 13, 2005 and brothers Andrew, Raymond, Lambert, Ervin, Richard, and Harvey.In lieu of flowers, memorials are preferred to the Alzheimer’s Association.

Visitation will be from 10-11 AM on Saturday, June 25th at the Miller-Carlin Funeral Home.

In lieu of flowers, memorials are preferred to the Alzheimers Association.