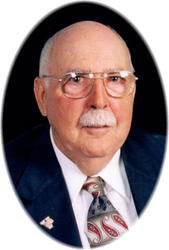 The Mass of Christian Burial, celebrating the life of Herbert W. Breth, age 81, will be at 11:00
AM, Thursday, August 8, 2013 at St. Anthony Catholic Church in St. Anthony, MN.  Burial will
be in the parish cemetery.  Herb died Monday morning at the Pine Haven Care Center in Melrose.  Visitation will be one hour prior to the services on Thursday at the church in St. Anthony.  Arrangements are being made by the Miller-Carlin Funeral Homes.Herb was born July 9, 1932 in St. Anthony, MN to Stephen and Catherine (Gerads) Breth.  He
grew up in St. Anthony and entered the U.S. Army when he was 18.  After his discharge, he
returned to the area and was a Butter Maker at the St. Anthony Creamery and then the Miere
Grove Creamery.  He married Irene Cherne in 1961 at St. Anthony Catholic Church.  In the fall of 1966, the couple moved to Coon Rapids where Herb worked as an Operating Engineer at Mercy Hospital.  He retired in 1994 and the couple returned to St. Anthony.  Herb was a member of St. Anthony Catholic Church, St. Stephens Catholic Church Knights of Columbus in Anoka, Anoka American Legion and Coon Rapids V.F.W.Herb is survived by his children; Jan (Randy) Beers, Columbia Heights; Jim Breth, Isanti; Debra
Conard, Woodbury; grandchildren, Brett, Stephanie, Rachel and Hannah.  He is also survived by
his brothers and sisters, Dorain Layton, Portland, OR; Reinhard Breth, Upsala; Irene Pierskalla,
Albany; and Stephen Breth Jr. Albany.Herb  is preceded in death by his parents, his wife Irene, his son, Jeff  and his brothers, Martin
Breth and Werner Breth.

There will be a one hour visitation prior to the mass on Thursday morning at the church in St. Anthony

The Mass of Christian Burial, celebrating the life of Herbert W. Breth, age 81, will be at 11:00 AM, Thursday, August 8, 2013 at St. Anthony Catholic Church in St. Anthony, MN. Burial will be in the parish cemetery.

To Herb’s children and family:
I spoke with you when you came to remove your Dad’s things from his room. I just want to reinterate that Herb always was in a great mood and told fun stories in Activities. I shared with you how he liked to shake dice. He also enjoyed going to mass many days and coming sometimes to Bakers/Tasters Group where we made lots of homemade goodies. I want to extend my sympathy to all of you and let you know Herb will be missed! I will remember him when we recall all Veterans who have been here. Your family will be in my prayers .

Our sympathy to the family. Herb will be missed at the daily activities that he enjoyed coming to. We will miss the good sense of humor which he shared with staff and others residents. You will be in our prayers and the Thursday rosary in the afternoon. God Bless

I will always remember the “little dirty ditties” that probably never none of us heard…. And the version stew at the house… It was the best this side of anywhere! Corbin