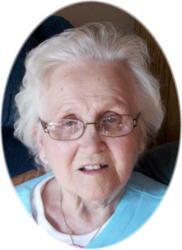 Mass of Christian burial celebrating the life of Jeanette Valeria Fellegy, age 89 of Holdingford will be 12PM Tuesday, July 2nd 2013 at the Church of All Saints – St. Hedwig in Holdingford. Burial will take place in the parish cemetery following the service. Jeanette died peacefully at Mother of Mercy Nursing home Wednesday afternoon. There will be a visitation Tuesday morning at the church from 10AM-12PM prior to the mass. Arrangements are being made with the Miller-Carlin Funeral Home of Holdingford.Jeanette was born December 6th, 1923 to Joseph and Catherine (Kasko) Kollodge in Holdingford. Jenny married William Fellegy in Holdingford on February 18, 1944. She lived her entire life in the Holdingford area where she worked as a home-maker raising her ten children. Jenny was a devout member of St. Hedwig’s Catholic Church in Holdingford where she was a member of the Christian Mothers, the Rosary Sodality, the funeral lunch committee, and a 45 year member of the church choir. Jenny especially loved spending time with all of her children and grandchildren. This was shown through the many hours she spent caring for them over the years. Church and family truly were her life.Jeannette is survived by Bill Fellegy, Albany; her children Diane (Ray Schmidt) Tschida, Avon; Pat (Bill) Skay, Avon; Jim (Brenda) Fellegy, Mauston, WI.; Terry Litchy, Holdingford; Mary (Gary) Binek, Burtrum; John (Lori) Fellegy, Holdingford; Ron (Cleo) Fellegy, Upsala; Steve (Mary) Fellegy, Holdingford; Billy Fellegy, Holdingford; her 29 grandchildren, 25 great-grandchildren, and 3 great-great grandchildren; and her siblings Norb Kollodge, Holdingford; Duke Kollodge, Holdingford; Kenneth Kollodge, Minneapolis; Del Torsen, Bloomington; Lou Meier, Albany; and Arel Lysher, Duluth.She is preceded in death by her parents Joseph and Catherine Kollodge, and her son Tom Fellegy.

There will be a two visiation for Jenny from 10-12PM Tuesday, July 2nd at St. Hedwigs

Church of All Saints St. Hedwig

Mass of Christian burial celebrating the life of Jeanette Valeria Fellegy, age 89 of Holdingford will be 12PM Tuesday, July 2nd 2013 at the Church of All Saints St. Hedwig in Holdingford. Burial will take place in the parish cemetery following the service.

Church of All Saints St. Hedwig

I will never forget a joke she told us (Tiffany) on the way to Saint Cloud. While driving past a cemetery, grandma asked us, “How many people do you think are dead in that cemetery?” My sister and I would respond with various numbers. In fact, we would argue about who was correct. After five minutes or so, grandma said, “What do you girls mean? THEY ARE ALL DEAD.” Haha. Now, every time I drive past a cemetery I think of her joke. We should have used it for her epitaph;)

Love ya grandma!
Stephie and Tiffy