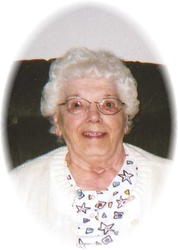 Julia M. BenkowskiHoldingfordMass of Christian Burial celebrating the life of Julia Benkowski will be 11 AM, Monday March 29, 2010 at St Hedwigs Catholic Church in Holdingford.  There will be a visitation one hour prior to the services.  Burial will take place in the parish cemetery following the service.Julia was born December 29, 1912 to Michael Waldoch and Joesphine Sczublewski in Pike Creak Township.  She attended Catholic school in Sobieski where she also worked on the home place.  She married John Batcha on November 17, 1931 and lived on a farm in Bowlus for 19 years.  Eventually the couple sold the farm, and moved to Holdingford.  Her husband John died shortly after in 1962.  She worked for a produce company for 10 years, cooked at the Holdingford High School, and also worked at Lens Com in St Stephen.  On September 4, 1962,  Julia married Michael Benkowski and moved to St Cloud in 1967.  Michael died in  1985.   Julia enjoyed crocheting and sewing.  She is a member of St Johns Cantius Church and Rosary sodality.Julia is survived by her brothers, Edward, Joseph and August Waldoch and many nieces and nephews.  She is preceded in death by her parents, both of her husbands, her sister, Tillie Sobania and her brothers, Simon, Thomas, John and Frank Waldoch.