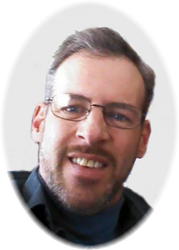 Services celebrating the life of Kevin P. Crandall, age 48 of Clearwater, will be 11:00 AM on Thursday, February 12th at the United Methodist Church in Clearwater.  Burial will be in Acacia Cemetery.  Kevin died on Saturday, February 7 in Buffalo, after a long battle with cancer.  Friends may gather after 10:00 AM, Thursday at the church in Clearwater.  Arrangements are being made by the Miller-Carlin Funeral Home in St. Cloud.

Kevin was born October 1, 1966 in St. Cloud to Tim and Pat (Hermes) Crandall.  He lived in Clearwater before moving to Clear Lake as a young child.  He returned to live in Clearwater as an adult where he was self employed in the construction business.  Kevin was always thinking about how he could make the people he cared about happy.  He had a love for art and was an excellent drawer.  He also enjoyed playing music.  Kevin reached into so many lives and helped them find happiness or comfort.  He found great joy in cooking, and always loved to prepare elaborate meals for his group of girls; Taylor Pick, Shayna Bonkrude, Alexandra Eckerman, Kortney Haaf, and Jenna Grand; that he had “adopted” and thought of as family.  He was a selfless man who would literally give the world to his loved ones if it meant they would be happy, even if only for a second.  He will always be remembered as our Superman.

So sorry to hear about Kevin.  May God comfort you in this difficult time and my thoughts and prayers to your family.

It’s obvious that Kevin was loved.  I only met him a time or two, but Kris always kept me up to date on his progress.  Being a cancer survivor, it saddens me when this awful disease claims another life.  I’m just glad that his suffering has ended.  Accept my symapthy, but know that you will overcome this with time and the help of those around you.  May Kevin’s energy help you in the days ahead.

My heart goes out to the entire Crandall family. I have often thought of them as a second family to me. I love you all and I know Kevin will live on forever in your hearts and memories.

Kevin was an insperation to all who knew him!!!!  He was our son in law for many years and we always had a great time with him.   He was married to our wonderful daughter Angela, who was there for him towards the end.   Thanks to Becka and Angela for sitting with him,  and reading to him, and loving him when he needed it.   We have lost a wonderful person!!   They always say, the young ones always go first!!   We are so very sorry for your loss, and thanks to Kris for helping with alex ,  your’e a great brother.  sympathy to Becka , Angela, and Alex , and the whole fam for your loss love you all larry and mary lindquist

My thoughts and prayers go out to the whole Crandall clan. I am so sorry for your loss!

My thoughts and prayers to your family.  May you find comfort during this difficult time.

To the Crandall family –  Your present loss is Heaven’s gain.  May you find comfort in the love and support of those all around you, hold the precious wonderful memories close, and let others slip away like drifting sands.