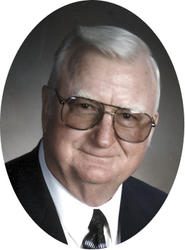 The Mass of Christian Burial, celebrating the life of Leo F. Carlin, age 83 of Clear Lake, will be 10:30 AM Saturday, December 22, at St. Marcus Catholic Church in Clear Lake. Burial will be in the parish cemetery. Leo died peacefrully at his home Monday evening. Friends may call from 4-8:00 PM Friday at the Miller-Carlin Funeral Home in St. Cloud and again after 9:00 AM Saturday at the church. St Marcus parish prayers will be at 5:00 PM Friday at the funeral home in St. Cloud.Leo was born May 13, 1929 in Clear Lake to James and Mary (O’Brien) Carlin. He graduated from the Clear Lake High School and served in the U.S. Army from 1947-1948. After his discharge, he began working as a Correctional Officer at the St. Cloud Reformatory. He married Phyllis Barnum on July 10, 1954 in St. Luke’s Catholic Church, Clearwater. Leo lived in Clear Lake his entire life. He retired as a Lieutenant from the St. Cloud Correctional Facility for Men in 1984. After his retirement, Leo worked part time as a school bus driver, potato truck driver and as a funeral assistant at the Miller-Carlin Funeral Home. Leo was a life-long member of the St. Marcus Catholic Church where he was an Usher, Lector, Eucharistic Minister and former choir member. He was a member of the St Marcus Knights of Columbus, VFW post 428, and a former member of the Clear Lake Lions Club. Leo was also a member of the Clear Lake Volunteer Fire Department from 1948-1989 and he served as the Treasurer, Council Member and three-term Mayor for the city of Clear Lake.Leo is survived by his wife, Phyllis, Clear Lake; his children, Barry Carlin, Winter Haven, FL; Rebecca Carlin, Winter Haven, FL; Margaret (Marvin) Engen, Clear Lake; Patrick (Michelle) Carlin, Big Lake; Constance (Paul) Carlin-Voge, Duluth; and William (Lezlie) Carlin, St. Cloud. He is also survived by his brothers and sisters, James (Jule) Carlin, White Bear Lake; Patricia Hetrick, Elk River; Mary (Bob) Gospeter, Burnesville; Daniel (Betsy) Carlin, Faribault; and nine grandchildren, Rachel Engen, Brian Engen, Mitchell Engen, Mary Carlin, Jackson Voge, Broderick Carlin, Kortney Carlin, Morgan Carlin and Chandler Carlin.Leo is preceded in death by his parents, his brothers and sisters, Charlotte Fladung, Margaret Henry, Edward Carlin, and Dolores EmmerichLeo’s family would like to extend a speical “Thank You” to the Clear Lake Rescue Squad for everything they did for Leo.

Visitation will be from 4-8:00 PM, Friday, December 21 Parish prayers will be at 5:00 PM Friday at the Miller-Carlin Funeral Home in St. Cloud

Visitation will be at the Miller-Carlin Funeral Home in St. Cloud

Memorials are preferred to the Clear Lake Fire and Rescue Squad

My thoughts and prayers are with you. I know how hard it is to have a loved one die at this time of year. May you all have the peace of God that goes beyond all understanding.

You’re in our thoughts and prayers!!

Bill and family, we are sorry to hear about the lose of your father. We are still recovering from recent losses of our mothers and we understand what you are going through. You are in our thoughts and prayers.

Our sympathy and condolence to you and your families durnig this sad time. Our thoughts are with you.

My deepest sympathy during this sad time. You are in my thoughts and prayers.

I’ll always remember Leo as the uncle we went deer hunting with. We always were on the lookout for becoming the victim of one of Leo’s many pranks.
One time he got me good. I got very drowsy during the afternoon hunt. I found a secluded spot to lie down to nap. When I woke up, my rifle was gone. He had swiped it, and was hiding in the nearby bushes. His laughter soon gave him away.
Just one of many memories of Leo.

Bill and family, I’m sorry to hear about the loss of your dad. Know that you will be in my prayers. Fr. Mike