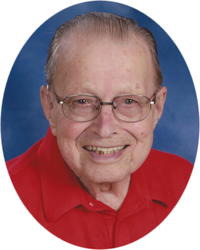 Mass of Christian Burial celebrating the life of Leo H. Pundsack, age 94, of Waite Park, will be at 11:00 AM on Friday, April 24, 2015 at St. Joseph’s Catholic Church in Waite Park.  Father Vince Lieser will officiate and burial will take place in parish cemetery with military honors.  Leo passed away peacefully early Sunday morning.  There will be a visitation from 4:00-8:00 PM on Thursday, April 23, 2015 and again after 10:00 AM Friday morning at the Miller-Carlin Funeral Home in St. Cloud.  Parish prayers will be at  4:30 PM Thursday evening at the funeral home.

Leo was born on Jan. 30, 1921 to Frank and Anna (Wehsler) Pundsack in St. Francis.  He grew up in the Albany area with his brother and four sisters.  Leo was drafted into military service during World War II and served with the U.S. Marine Corps from 1944-1946.  When he returned, he worked with his father repairing horse harnesses and in their shoe shop aptly named “Frank Pundsack & Son.”  On Oct. 28, 1948, Leo married Bea Kalla at St. Joseph’s Catholic Church in Waite Park and together they welcomed four children into their family.  Leo worked for the V.A. for 30 years, first as a Nurse’s Aide and later he taught upholstery as an Occupational Therapist, retiring in 1984.  He ran his own upholstery business out of his home shop until 2009 and was the proud owner and operator of “Leo’s Bar – Dad’s Family Pub.”  He was very handy, enjoyed refurbishing old furniture, and generally regarded as a “Mr. Fix-It.”  Leo liked family cookouts, especially the fish fries, and always kept a full keg in the garage.  He looked forward to his morning coffee with The Boys, his two brothers-in-law LeRoy and Harvey.  Leo was an outgoing man, a hard worker with a good attitude and he loved practical jokes.  He was a member of St. Joseph’s Church in Waite Park, a Lifetime Member of VFW Post 4847 in St. Cloud, and a member of the Waite Park Legion Post 428 for 69 years.

He is preceded by his parents Frank and Anna, his wife Bea in 2009, his brother Ray Pundsack, his sisters Ermina Moonen, Ludwina Brinkman, Clara Sand, and Dorothy Elfering.