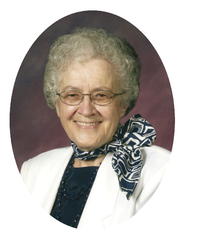 Funeral services celebrating the life of Lydia Elizabeth Bratvold, age 90, of St. Cloud will be Sunday, July 25, 2010 at 2:00 PM at the Life Assembly of God Church in St. Cloud.  Pastor Craig Moore will officiate.  Friends may call from 4:00 PM until 7:00 PM on Saturday, July 24, 2010 at the Miller-Carlin Funeral Home in St. Cloud, and again at 1:00 PM on Sunday at the Church.  Burial will take place on Monday, July 26, 2010 at the Evergreen Cemetery in Staples at 11:00 AM  Lydia died peacefully in her home Wednesday surrounded by her family.  Arrangements are being made with the Miller-Carlin Funeral Home in St. Cloud.Lydia was born October 25, 1919 in Hopkins, MN to Hattie (Hudec) and Ludvik Kakach.  She grew up on the family farm in Hopkins.  Lydia married her first husband Stanley Johnson on June 14, 1941 in Hopkins.  She married her second husband Claude Bratvold on June 16, 1967 in St Paul.  She ministered with her husbands for many years living in Montana, Iowa, North Dakota, and Minnesota, and was a loving wife and mother.  She was a volunteer worker for Treasure Chest, and Place of Hope.  Lydia was also very active in the church where she worked with Senior Citizens.  Lydia was a member of the Life Assembly of God Church in St. Cloud. Lydia is survived by her children Sidney (Brenda) Johnson, Baxter; Ilene (Paul) Anderson, Superior, WI; Muriel (George)Thomassen, Amsterdam, Netherlands; her step children Linda (Steve) Berg, Minnesota City; Larry (Kathy) Bratvold, Springfield MO; and Dr Craig (Treasa) Bratvold, Detroit Lakes;  her brother Japhat Kakach, Eden Prairie; and brother-in-law Harry Nelson, Richfield, MN.  She is also survived by her 7 grandchildren, 4 step grandchildren, 16 great grandchildren and many nieces and nephews. Lydia is preceded in death by her first husband Stanley Johnson in 1963, and second husband Claude Bratvold in 1998.  She is also preceded in death by her brothers and sister Richard Kakach, Milan Kakach, and Pauline Nelson; her sisters-in-law Frieda Kakach, Phyllis Kakach, and Lessley Kakach; her grandson Todd Johnson; and daughter-in-law Nancy Johnson, and many other relatives and friends.Memorials preferred in lieu of flowers.

Memorials are preferred in lieu of flowers

To the family of Lydia,
She was such an inspiration to everyone she knew. Her
love for the Lord, her family and friends was evident in
how she lived each and every day. We are sure she is rejoicing in heaven with her sister, Pauline and her brothers. May the peace of the Lord fill your hearts during this time!

I just want to say I am sorry for the loss of your mother. She was a wonderful lady who loved the Lord and shared her faith with many. She always had a smile regardless what she herself was going through. Her friends will miss her and the encouraging words she gave to us. We loved you dearly Lydia. Blessing to the family. Our prayers are with you at this time.

I had the chance to meet and work with Lydia at the Treasure Chest, she is definitely a woman of God. She will surely be missed.