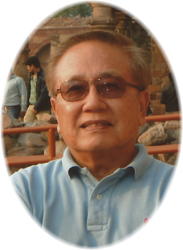 Services celebrating the life of Manuel P. Taguinod, 73, of Saint Cloud will be at 12 Noon on Saturday, October 11, 2014 at the Miller-Carlin Funeral Chapel in St. Cloud.  Fr. Mark Stang will officiate and private burial will take place at a later date.  Manuel passed away at his home Tuesday, October 7th.  There will be a visitation after 10:00 AM on Saturday until the time of service at the funeral home.  Arrangements are being made with Miller-Carlin Funeral Home, St. Cloud.

Manuel was born on July 18, 1941 in the Philippines to Sergio and Adela (Perez) Taguinod.  He retired as a Bank Manager from one of the largest commercial banks in the Philippines prior to migrating to the United States.  He joined the St. Cloud Hospital and worked at Admissions until retirement after 24 years of services.

He is preceded by his parents Sergio and Adela, and his beloved aunt Clodualda Taguinod.

Joanna and Fay, I am so sorry for your loss. I have many fond memories of working with Manuel and both of you at SCH.