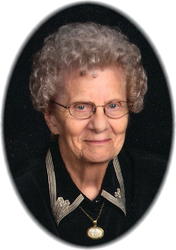 The Mass of Christian Burial, celebrating the life of Marie Vos, age 87 of Albany, will be at 11:00 AM December 28, 2013 at Seven Dolors Catholic Church in Albany.  Father Michael Naughton, OSB will officiate and burial will take place in the parish cemetery.  Marie passed away peacefully at Mother of Mercy Nursing Home in Albany Friday. There will be a visitation from 4:00-8:00 PM Friday December 27, 2013 and again after 10:00 AM Saturday at the Miller-Carlin Funeral Home in Albany.  Parish prayers will be at 4:00 PM followed by the Christian Mothers praying the rosary at 4:30 PM Friday night at the funeral home. Arrangements are being made with the Miller-Carlin Funeral Home.Marie was born on April 21, 1926 in New Munich, MN to Joseph and Josepha (Middendorf) Hiltner.  She married Raymond J. Vos on October 19, 1948 at the Immaculate Conception Catholic Church in New Munich.  The couple lived on a farm near St. Anthony until 1997 when they retired and moved to Albany.  Marie was a member of the Seven Dolors Catholic Church and Seven Dolors Christian Mothers in Albany.Marie was a homemaker and loving mother who enjoyed dancing and square dancing with Raymond, gardening, embroidering, baking and playing cards. She was an Avon Lady from 1966-2008.  Marie was an avid bowler; she was on a league from 1988-2000.  She loved playing with her grandchildren and great-grandchildren; they often requested that she make her famous homemade pancakes, chocolate chip cookies and lemon bars.She is survived by her loving children Glenn (Joan) Vos, Avon, Janet (Roger) Blenker, Avon, Janice (Ken) Linn, St. Cloud, Mary Lou (Tom) Groetsch, Avon, Marlene (Bob) Serfling, Buffalo, Beverly (John) Overman, Albany, Bonnie (Randy) Karsch, Albany and Neal Vos (Julie Pratt), Albany; 17 grandchildren and 10 great-grandchildren.She was preceded in death by her parents, husband Raymond in 2003; grand-daughter Rachel Dallman; brothers Joseph Jr. and George Hiltner; sisters Edna Cherne and Louise Loxterkamp; brothers-in-law Tony Cherne and Tony Loxtercamp.

There will be a visitation from 4:00-8:00 PM Friday December 27, 2013 and again after 10:00 AM Saturday at the Miller-Carlin Funeral Home in Albany. Parish prayers will be at 4:00 PM followed by the Christian Mothers praying the rosary at 4:30 PM Friday night at the funeral home.

I am sorry for your loss. Marie was a wonderful lady and will be missed by all who knew her. My thoughts and prayers to your family during this difficult time.

We are so sorry for your loss. You are in our thoughts and prayers.

So sorry for your loss, I will miss that cute little smile. My thoughts and prayers are with you all at this difficult time.