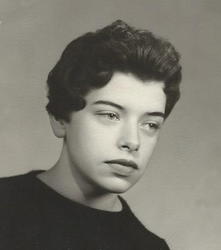 The Mass of Christian Burial, celebrating the life of Mary Jo Glatzmaier Hoeschen, age 73 of Albany, will be 11:00 AM, Thursday, June 2 at the Seven Dolors Catholic Church in Albany. Burial will be in the parish cemetery. Mary Jo died Friday at her home in Albany. There will be a visitation after 10:00 AM Thursday at the Seven Dolors parish center. Arrangements are being made by the Miller-Carlin Funeral Homes.

Mary Jo was born January 12, 1943 in Albany to Joseph and Marie (Thelen) Glatzmaier. She began working with her mother at the Albany Hotel Restaurant when she was 11 years old. When she was young, her nickname was “Booper” to her friends and family. She had a sense of humor and loved to hear jokes and she would respond with huge roars of laughter. She purchased the restaurant in 1979 when her mother retired. She was dedicated to her work and always wanted to be the best cook possible. She devised new recipes to fit the needs of her customers. She married Vernon “Sonny” Hoeschen on September 4, 1989 in Seven Dolors Catholic Church in Albany. Sonny died on March 14, 1999. Mary Jo loved animals and was especially fond of the family dogs; Gretel and currently Samantha. She would feed the dogs chicken, hamburgers and steaks as if they were her regular customers. These dogs will miss her greatly. Mary Jo was a member of the Seven Dolors Catholic Church.

She is preceded in death by her parents, Joe and Marie (Thelen) Glatzmaier, her husband, Vernon (Sonny) Hoeschen, brother-in-law, John Schwartz and sisters-in-law, Irene Rademacher, Rose Gysberg and Verena Nathe.

Mary Jo will be missed by all who had the pleasure of feasting on her homemade cooking.

Visitation will be after 10:00 AM on Thursday, June 2, 2016 at the Seven Dolors parish center in Albany.

The Mass of Christian Burialwill be at 11:00 AM onThursday, June 2, 2016 at the Seven Dolors Catholic Church in Albany. Fr. Brad Jenniges, OSB will officiate and burial will follow in the parish cemetery.