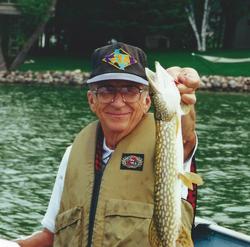 It is with deep and heavy sadness, the family of Myron McKenzie announce his passing on June 7, in the Country Manor Health Care Center.  Myron was born to Lee and Gladys (Berkoltz) McKenzie and raised in Foley with brothers, Wayne and Owen.   He then went on to work at Electrolux for forty-five years. .  He served in the U.S. Army and was stationed at Fort Worden in Port Townsend, Washington.   He moved to St. Cloud in the early 1970’s.   He married Bernice Jaeckels in 1959 and they were together for 56 years until her passing in 2015.

It was the small comforts and simple pleasures that had real meaning to Myron.  Whether it was time with grandchildren, visiting with his neighbors on the south side of St. Cloud, or walking at the Whitney Center, he enjoyed life’s everyday moments.  His unwavering love and devotion to family along with his sweet smile will be missed.  A special thank you to Country Manor Health Care and St. Croix Hospice for their loving  care and support.

Myron will be laid to rest at Fort Snelling National Cemetery.  A private memorial service will be held for family to celebrate Myron’s life.

Myron will be laid to rest at Fort Snelling National Cemetery. A private memorial service will be held for family to celebrate Myrons life.