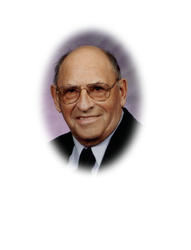 The Mass of Christian Burial, celebrating the life of Norbert W. Ertl, age 87 of Holdingford, will be 11:00 AM, Wednesday, December 28 at All Saints Catholic Church (formerly St. Mary’s) in Holdingford.  Burial will be in the St.Mary’s Parish Cemetery.  Norbert died Saturday at the Mother of Mercy Nursing Home in Albany.  There will be a visitation from 4-8:00 PM Tuesday and again after 10:00 AM Wednesday at the Miller-Carlin-Brenny Funeral Home in Holdingford.  St. Mary’s parish Prayers will be at 5:30 PM followed by the Holdingford Knights of Columbus and the Holdingford VFW at 7:00 PM Tuesday evening at the funeral home in Holdingford.Norbert was born July 27, 1924 in Brockway Township to Mathias and Ada (Lesniak) Ertl.  He served in the U.S. Army during WWII.  He married Theresa Kunstleben on October 1, 1957 in Melrose.  The couple farmed together near Holdingford.  Norbert was a member of All Saints Catholic Church in Holdingford, The Holdingford Knights of Columbus and the Holdingford VFW.Norbert is survived by his wife, Theresa Ertl, Avon; children; Sharon (Rick) Pogatschnik, Avon; Lynn (Jim) Staricka, Williston, ND; Carla (Mark) Daggitt, O’Fallon, IL; James Ertl, Avon; William Ertl, Avon; and Edward (Deb) Ertl, Avon.  He is also survived by his brother and sister, Marie Bieniek, Underwood, Clem (Esther) Ertl, St. Joseph; sister-in-law, Irene Ertl, Sartell and 7 grandchildren and 1 great-grandchild.Norbert is preceded in death by his parents, his brothers, Raymond Ertl, Louis Ertl, and Alphonse Ertl.

Memorials are preferred to the Albany Area Hospice or Helping Hands

We are very sorry for your loss. Your family is in our prayers.

Carla and Mark, We are sorry for your loss. All the folks at the USAF Expeditionary Center, Detachment 2 have you in our thoughts and prayers.

So sorry for your loss, you are in my prayers.
Lois & Dale Henrich
Morris, MN