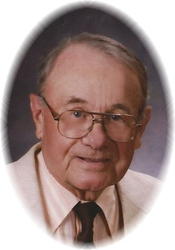 Mass of Christian burial celebrating the life of Norbert Theodore Vos, age 94, of Sartell, formerly of Holdingford, will be at 11 a.m., Thursday, October 16, at St. Mary’s Catholic Church in Holdingford. Father Roger Botz and Father David Grundman will officiate. Friends may call from 4-7 p.m., Wednesday, October 15, 2014, at the Miller-Carlin Brenny Funeral Home in Holdingford and at 10 a.m. until the time of service Thursday at the Church. Parish prayers will take place 5 p.m. Wednesday at the funeral home. Norbert, beloved and respected husband, father and grandfather, died Saturday, October 11, 2014, peacefully in his sleep.

Norbert was born May 29, 1920, in Holdingford to Thomas Vos and Rose (Schiller) Vos. Growing up in Holdingford, Norbert established himself as a competitive athlete, starting on the town baseball team as a freshman in high school. His love of sports followed him to St. John’s University where he was a four-sport letterman, participating in baseball, basketball, football and track. He was proud of playing every inning of every St. John’s baseball game for four year. He graduated from St. John’s in 1941 with a major in history and a minor in mathematics.  He began his career as a teacher and coach, working in Ivanhoe, Browns Valley and Foley, before enlisting in the Merchant Marines in 1944 where he served in the Philippines. Returning to Holdingford in 1945, Norbert resumed teaching and coaching, soon taking on principal duties as well.  He married Mary Botz on July 6, 1946. Together, they raised seven children.  In 1953, he became a Mobil Oil agent, retiring in 1984. He was an active member of St. Mary’s Catholic Church and served on the Holdingford School Board.  He continued to live in Holdingford and wintered in Sun City West, Arizona, until 2013 when he moved into a Country Manor apartment in Sartell.  Throughout his life, he loved to play baseball, golf, poker and cribbage. He loved to read. He loved Mary and his family most of all.

He was preceded in death by his wife, Mary, and his parents.

Visitation will be from 4-7 PM, Wednesday, October 15 andParish prayers will be said at 5 PM Wednesday evening at the funeral home. Visitation will continue after 10:00 AM Thursday at Church of All Saints, St. Mary’s in Holdingford.

In lieu of flowers, memorials are preferred to the Holdingford Endowment Scholarship fund or St. John’s University baseball team.