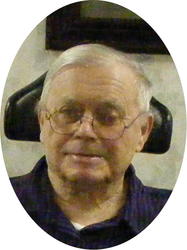 The Mass of Christian Burial, celebrating the life of Raymond J. Maciej, Sr. age 90, of Little Falls, formerly of Bowlus will be at 11:00 AM, Friday, December 23, at St. Stanislaus Catholic Church in Bowlus.  Burial will be in the parish cemetery. Fr. David Maciej, Fr. Michael Kellogg, Fr. Robert Rolfes and The Most Reverend John Kinney will officiate.  There will be a visitation from 4-8:00 PM Thursday, and again after 10:00 AM Friday all at the church in Bowlus.  There will be a Rosary service at 5:00 PM, followed by St. Stanislaus parish prayers at 7:00 PM Thursday at the church.  Arrangements are being made by the Miller-Carlin-Brenny Funeral Home, Holdingford.Ray was born January 11, 1921 on the family farm in Swan River Township to William and Josephine (Solarz) Maciej.  He married Kathryn Rudolph on September 9, 1941, in St. Stanislaus Catholic Church.  The couple farmed together and raised their 5 children. Ray was born, raised and worked on the same farm until 1983 when he retired and moved to Bowlus.  He enjoyed playing cards, especially Smear, he loved Old Time Music and he played the accordion.  He also enjoyed traveling, visiting others and playing horseshoes.  Ray was a member of St Stanislaus Catholic Church.Ray is survived by his wife of 70 years, Kathryn, Little Falls, his children, Robert (Janet) Maciej, Bowlus; Richard (Lois Ann) Maciej, Little Falls; Raymond (Lorie) Maciej, Jr., Royalton; Fr. David Maciej, Lastrup; Mary Resnikoff, Burnsville; grandchildren, Michael (Sarah) Maciej, Julie Maciej, Jeffrey (Rebecca) Maciej, Kevin Maciej, Ryan Maciej, Richelle (Mark) Schmitz, William (Julie) Maciej, Daniel (Janelle) Maciej, Steven Maciej and Christopher Resnikoff; great-grandchildren, Sean, Kyle, Katelyn, Liam, Rylan, Lauren and one on the way.Ray is preceded in death by his parents, his brothers, Peter Maciej , Stanley Maciej, Paul Maciej, Louis Maciej, Frank Maciej and his sisters, Mary Scepurek, Anna Stiller and Theresa Fussy.

Visitation will be from 4-8:00 PM Thursday and again after 10:00 AM Friday all at the church in Bowlus.

Visitation will be at St. Stanislaus Catholic Church in Bowlus

Uncle Ray will be truly missed by all of us. My thoughts & prayers are with the family.

mary and family, you are all in our thoughts and prayers.. i will miss ray i have many good memeries of ray and katherine and the farm. we had excellant times growing up and i believe thats cuz of the great parents we were lucky enough to have… may ray rest in peace and may the good lord help you all through this time of need…love to you all

Our deepest sympathy to Aunt Kathryn & family!
We are sorry that Mark & I and our family will not be able to attend the funeral mass for Uncle Ray. Please be assured that you are all in our thoughts and prayers during this difficult time. Treasure the memories that you have and may the good Lord grant you peace & love in the days to come!
Love,
Marlene, Mark & family

We extend our deepest sympathy for your loss. Our love is with you.