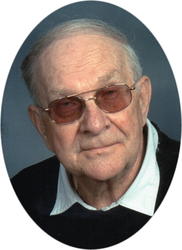 Mass of Christian Burial celebrating the life of Richard E. “Dick” Studer, age 93, of Saint Cloud will be at 10:30 AM on Saturday, May 14, 2016 at St. Augustine’s Catholic Church, St. Cloud.  Fr. Aaron Nett will officiate and a luncheon will follow before the burial with military honors in Annunciation Cemetery, Mayhew Lake.  Dick passed away at the VA Medical Center surrounded by his loving children.  There will be a visitation from 4:00-8:00 PM on Friday, May 13, 2015 at the Miller-Carlin Funeral Home, St. Cloud with parish prayers at 4:00 PM.  Family and friends may also gather after 9:30 AM until the time of mass Saturday at the church.  Arrangements are being entrusted to Miller-Carlin Funeral Home, St. Cloud.

Richard “Dick” was born on August 25, 1922 to Joseph and Margaret (Dowling) Studer at St. Raphael’s Hospital in St. Cloud.  He was raised on a farm in Mayhew Lake and attended Sauk Rapids schools.  Dick entered the US Army Medical Department during WWII.  On November 6, 1945, he wed Anna Evelyn “Evie” Cosenza in Weirton, WV and their family was completed with the births of their children.  Dick attended the St. Cloud Business College and was a salesman for the Remington Rand Corp. He also worked in sales and management for the former Fritz-Cross Co.  In 1956, he joined the Metropolitan Insurance Co. as an agent, retiring in 1981.  Dick was a life member of the Disabled Veterans, American Legion Post 76, Metropolitan Life Veterans Assoc, Fraternal Order of Eagles #622, former member of the St. Augustine’s Catholic Church.

He is greeted in Heaven by his wife Evie, who passed on December 13, 2006; his daughter Mary Ann Studer; his parents Joseph and Margaret; his brothers Joseph, Lawrence, James, Robert, Charles, and Willard; and his sisters Mary Ellen Sufka and Genevieve Mahigan.

There will be a visitation theMiller-Carlin Funeral Home inSaint Cloud from 4:00-8:00 PM on Friday, May 13, 2016. Parish prayers will be at 4pm Friday evening at the funeral home. A second visitation on Saturday, May 14, 2016 will take place at St. Augutine’s Church in St. Cloud an hour prior to mass.

Mass will be at 10:30 AM on Saturday, May 14,2016 at St. Augustine’s Catholic Churchin Saint Cloud. A luncheon will follow mass and full military honors will be conducted at the Annunciation Cemetery in Mayhew Lake.

Richard was a kind and loving uncle. His memory is my greatest treasure to have and hold in my heart forever. — To honor Richard’s life, I’ve built a small online photo gallery and uploaded some audio clips to YouTube too.

I always enjoyed the time spent with Richard. He was friendly and engaging.