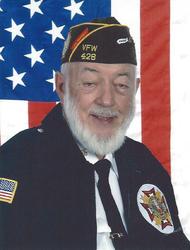 Robert Philip Lenarz, age 73, of Saint cloud, died on November 2, 2016. He pre-arranged his own funeral: he wished to be cremated and immediately interred at the Minnesota State Veterans Cemetery next to Camp Ripley in Little Falls.

Robert was born on June 27, 1943 to Arthur and Lenore (Rademacher) Lenarz. He grew up in St. Martin and graduated from Paynesville High School in 1961.  In August of 1961, Robert  joined the United States Army and his last year of service was spent in Vietnam.  He was a life member of VFW Post 428; he was also a member of the American Legion, the Fraternal Order of Eagles, and the Moose Lodge #1400.  Robert retired from the Minnesota Department of Corrections, St. Cloud Reformatory on July 7, 1998, after 26 years of state service.  Robert enjoyed hunting, fishing,  and spending time with his hunting and fishing friends.  He passionately loved the great outdoors.

He is preceded in death by his parents Arthur and Lenore, his siblings Roger, Betty Jane, Ralph, Gerald, David, Art J., Leroy, and Gregory.

Interment ceremony for family will be at the Minnesota State Veterans Cemetery, Little Falls.

Sarah and I were absolutely crushed to hear of your passing. Our neighborhood in St Cloud will be less in your absence. I still remember the very first day we moved into the house next to you, and we had not been there more than half an hour when we got a knock on the back door. There stood the older gentleman who introduced himself as Bob, and welcomed us to the neighborhood. We had a good half-hour conversation that day, and many more over the years we lived in St Cloud as your neighbor. You were not just our neighbor, but a right good friend as well. I remember you being almost as excited as Sarah and I when you found out Sarah was pregnant with Charlotte. The same when Lilian came along after all our struggles with that pregnancy. You might as well have been those girls’ grandpa the way they loved to come over and bother you when you were in the garden or working on your Spyder.

Gonna miss you, old man. We all are. Godspeed, sir. May the stars shine a little brighter in your honor.