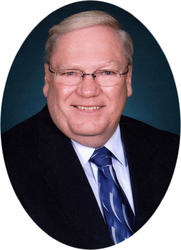 Mass of Christian Burial, celebrating the life of Rodney Adolph, age 70 of Holdingford, will be 12:00 PM Saturday, October 20, at All Saints, St. Mary’s Catholic Church in Holdingford.  Burial will be in the parish cemetery.  Rodney died Sunday morning at the St. Cloud Hospital after a battle with cancer.  Visitation will be from 4-9:00 PM Friday and again after 10:00 AM Saturday at the Miller-Carlin-Brenny Funeral Home in Holdingford.  Parish prayers will be at 7:00 PM Friday at the funeral home.Rodney was born August 13, 1942 in St. Cloud to Ferdinand and Ethel (Curtis) Adolph.  He grew up in Eden Valley and moved with his family to a farm near Holdingford in 1959. Rodney married Cathy Fink on May 4, 1964 in St. Mary’s Catholic Church in Holdingford.  Rodney worked in the creamery in Freeport and then the creamery in Opole, before he started working as a heavy equipment operator for Martin Fruth, Inc and then Niehaus Road Construction.  In 1980, he purchased the Roy Brenny Oil Company and changed its name to the Adolph Oil Company.  In 1985, he expanded his business by purchasing the Stroeing Oil Company in Freeport.  He sold his business in 2004.  Rodney also worked for the Brenny Ambulance Service in Holdingford, and started with the Stanley Brenny Funeral Home in 1964, the Brenny Funeral Homes of Albany and Holdingford, and currently the Miller-Carlin-Brenny Funeral Homes.  He was active in the Holdingford Fire Department, the Holdingford Rescue Squad, he drove bus for the Holdingford Schools, he worked in the maintenance department for the City of Holdingford, he was active in his church, All Saints, St. Mary’s, where he was an Usher, Greeter, Parish Council member and did maintenance. Rodney was also a former member of the Holdingford Commercial Club. He also enjoyed delivering Meals on Wheels.Rodney is survived by his wife, Cathy Adolph, Holdingford; his sister, Bonnie (John) Woitalla, St. Anna, his brother-in-law, Robert Stoermann, Holdingford; sister-in-law, Louise Adolph, Holdingford; brother-in-law, Dan (Dianna Vossen) Fink, Monticello; and many nieces, nephews and friends.Rodney is preceded in death by his parents and his brother, Larry Adolph and sister-in-law, Sylvia Stoermann.

Visitation will be from 4-9:00 PM Friday and again after 10:00 AM Saturday at the Miller-Carlin-Brenny Funeral Home in Holdingford. Parish prayers will be at 7:00 PM Friday at the funeral home.

Rest in Peace dear Rodney, you will be missed by many.

I’m going to miss you my friend, but I know you ll always be up there looking down on us. I tell ya what though Rodney, I know I am a better person for having known you and learning what i did from you and that’s something I will never lose.

I have to say Life is so short! Rodney you have touched so many lives. You have done so much for our community and will be greatly missed! Thanks for all the packs of gum you gave us when you delivered fuel to my parents farm. Its the little things in life we remember…you were always full of smiles and kind words.

I wish the family peace, prayers and blessings.

Rodney came into my life as an employee 11 years ago. It wasn’t long after that, when he became a dear friend and colleague. Over the past decade, he became family to me. Rodney always answered the phone with a smile and a joke. He could make me laugh on any day at any time. I looked forward to working with him, to seeing him at gatherings, or just talking to him on the phone. Rodney was also my ‘Meals on Wheels navigator’. When I delivered meals, I picked him up to navigate me to the homes, at which time we caught up on jokes as well. I am so fortunate to have known him and have him as part of my life. He was a gift to anyone who knew him. Thank you, Cathy, for sharing him with us at the funeral home. You will always remain in our thoughts and prayers and continue to be part of our family.

He was a very compasionate man, when we adopted my son Kyle he treated Kyle as a part of the family right away, he never asked Kyle about where he came from, he always asked how are u doing and wanted to know if he doing good in school. Rodney and Kathy alway treated Kyle as he was born into the Stoermann famliy and that made me and his mom feel very good. we visited Rodney when he was in the hospital and he was always concerned about how my son Kyle was doing never talking about what was wrong with him, he was concerned how Kyle was doing in school, Kyle would tell I am getting A’s and B’s, Rodney would say keep it up u will go palces if you have good grades. Kyle wanted to go on the computer when we visited one time and we did for a little while, we watched for a little while, Rodney said to Kyle, when you come back the next time you can teach me something the next time, Kyle smiled and said I will. It didn’t take much for Kyle to love and respect Rodney and Kathy. RIP Rodney