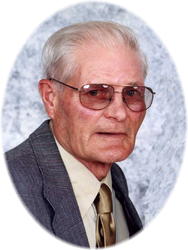 Funeral services celebrating the life of Walter A. Jopp, age 81 of Albany will be 10:30 AM Thursday, February 24, 2011 at Our Savior’s Lutheran Church in Albany.  Pastor Brad Pearson will officiate, and burial will take place in the parish cemetery following the service.  Walter died at his home surrounded by his family Sunday morning after a brief battle with cancer.  Friends may call from 4-8 PM Wednesday, February 23, 2011 at Our Savior’s Lutheran Church, and again from 9:30 until the time of the service at the church on Thursday.  Arrangements are being made with the Miller-Carlin Brenny Funeral Home in Albany.Walter was born July 22, 1929 on the farm in Albany to Arthur and Elsie (Kranz) Jopp.  He lived in the Albany area his entire life.  He married Delores Koehn on June 14, 1952 at St. John’s Lutheran Church in Krain Township.  He worked as a farmer, but also worked for Franklin Manufacturing for 19 years and after retiring from farming, drove mail truck for Arnie Wehsler.  Walter played baseball for the Farming and Albany baseball teams, he was a member of the National Farmers Organization, and he was also a member of Our Savior’s Lutheran Church in Albany.Walter is survived by his wife Delores Jopp, Albany; his children Thomas (Connie) Jopp, Avon; Timothy (LuAnn) Jopp, Albany; Patricia (John) McGreevy, St. Cloud; Wayne Jopp, Albany; Jean Rushmeyer, Albany; James (Renee) Jopp, St. Joseph; Daniel (Robin McGovern) Jopp, Virginia Beach, VA; Joani (Joseph) Mergen; Albany; Christopher (Jennifer) Jopp, Becker; his sister Shirley (Robert) Koehn, Holdingford; and his 9.9 grandchildren.He is preceded in death by his parents, his brother Orville Jopp, his sister Olivia Klug, and his son-in-law Steve Rushmeyer.

Friends may call from 4-8 PM Wednesday, February 23, 2011 at Our Saviors Lutheran Church, and again from 9:30 until the time of the service at the church on Thursday.