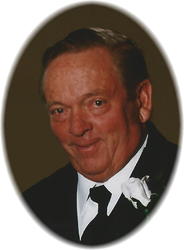 Mass of Christian Burial celebrating the life of William Welle, age 74, of Albany, will be at 11:00 AM on Friday April 10, 2015 at the Seven Dolors Catholic Church in Albany.  Father Cletus Connors, OSB will officiate and burial will take place in the parish cemetery.  Bill passed away Saturday morning surrounded by his family at Mother of Mercy Assisted Living.  There will be a visitation from 4:00-8:00 PM on Thursday, April 9, 2015 and again after 10:00 AM Friday at the Seven Dolors Catholic Church in Albany.  Parish prayers will be at 5:00 PM followed by the American Legion praying the rosary at 5:30 PM Thursday evening at the church.  Arrangements are being made with Miller-Carlin Funeral Home, Albany.

Bill was born at home on December 2, 1940 to Nicholas and Monica (Wiechmann) Welle in Freeport.  He was raised with four siblings and, after graduating from Melrose High School, he served with the National Guard in Sauk Centre.  On September 4, 1965, he married Jeanette Scheibel at Seven Dolors Catholic Church in Albany and together they raised six children.  Bill loved being a dairy farmer and had a strong work ethic.  He enjoyed being outdoors driving tractors, fishing, and hunting, especially deer and turkey hunting.  Bill was a loyal friend to many and loved socializing.  He could be found bowling, playing pool on a local league, participating in other community events, and teaching religious education at Holy Family School.  He also liked to watch baseball (especially the MN Twins), visit county and state fairs, and go to auctions.  Woodworking was another pastime and he often built frames for the puzzles he had completed.  Bill was a committed family man who supported his children as they grew up, often acting as a sounding board for them.  He belonged to Seven Dolors Parish and the Albany Legion Post 482.  He was on the Board of Directors for the Freeport Creamery and the Upsala Co-op Creamery.  He was also active with Mid-America Dairyman and the MN Milk Producers.

He is preceded in death by his parents Nick and Monica Welle and his brother Leon Welle.

I am sorry for the familys loss, Bill Was  great Guy He will be Missed. Rest in Peace.

Bill seemed to have a nack for announcing at the quilt stand at the church bazaar.  We thought he did a good job with the microphone.  He and Jeanette were also nice neighbors on 5th street.